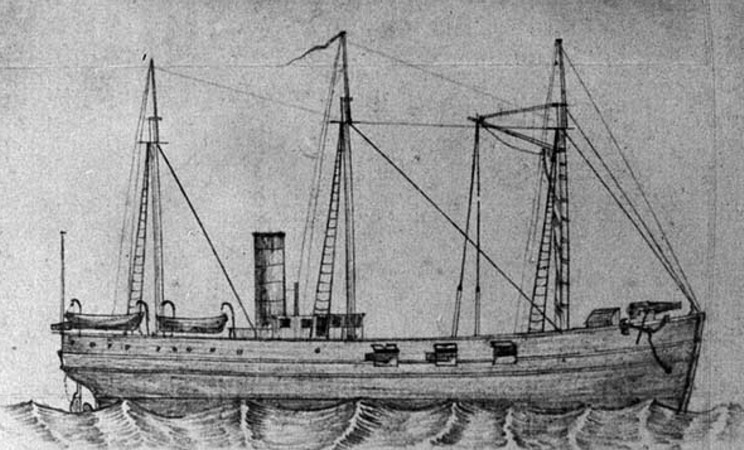 History Behind the Story #3: Naval Quarantines

THE HISTORY: If you have read Northern Fire, you know that my historical male lead, John Thomas, makes the decision to quarantine his ship when Typhoid breaks out.  When I first wrote Northern Fire, I never imagined a quarantine in modern times.  Then when I did the first read-through edit, the quarantine scene felt eerily familiar to me.  I realized that this is an instance in which history could be very useful to us.  Our ancestors have experienced something that we never have.  I encourage you to look at historical pandemics to see what it was like for those in the past.

Naval quarantines have a long history.  Do any of you watch Outlander? Claire and Jamie are forced to contend with a quarantine on their way from Scotland to America, if you would like to see an example in film.  Of course, there were diseases in the Civil War which led to this necessity, too.

Even though we’re fond of saying that the Germ Theory had not been accepted during the war, we too often leave it at that and imagine that people were without any sense that there was a possibility that diseases were transmittable from person to person.  This simply is not true.  There would have been no historical quarantines if it were.  People had witnessed too many epidemic diseases and the toll they took to be completely unaware that there were forces that they could not see at play.  You can find examples very far back in history of people being afraid they would “catch” something from someone else.  They just didn’t always know how.

A lot of diseases were thought to be caused by inflammation (this was why bloodletting was popular, although it was going out of fashion by the Civil War).  There was also a Miasmas Theory which hypothesized that “bad air” caused illness.  Not always untrue, but wrong, of course, in relation to what we now know about viruses and bacteria.  But if you think about it, the Miasmas Theory, while primitive, may actually have been useful for preventing the spread of disease during the Civil War.  A lot of illnesses are airborne, so not breathing air near a sick person was not a bad idea anyway.

Unfortunately, a lot of times, being cautious of the air didn’t hit at the actual cause of disease.  For instance, in Northern Fire, the illnesses at play are Typhoid and Yellow Fever.  The first was caused by bacteria in drinking water, the second, by mosquitos.  For Typhoid, there was actually an American scientist during the Civil War which put forward the “unclean food and water” theory, but it hadn’t gained much traction, as you can see during John Thomas’s conversation with the doctor, who writes it off as a bunch of nonsense.

Okay, so let’s move on to actual Civil War quarantines themselves.  There’s not a lot out there on this subject.  I think Civil War quarantines have slipped through the cracks for a lot of historians.  I have found few to no mentions even in my books solely devoted to Naval history, so this is a subject where you have to piece together scraps from letters and use a little imagination.

A lot of sources seem to indicate that Civil War Naval quarantines were used most commonly and effectively for Yellow Fever.  Robert F. Reilly says, rather boldly, that quarantines “virtually eliminated” Yellow Fever during the war.[1]  So let’s dig into why that might be.

First of all, Yellow Fever really hit Union soldiers in the Mississippi Delta hard since they were newcomers who hadn’t built up an immunity to the disease.  As an example of contrast, Jefferson Davis had Yellow Fever as a young man, which would have given him lifelong immunity.  Therefore, the Union had a real problem on its hands and dealt with it swiftly.  The following is an extract from the Baylor University Medical Journal which explains what happened.

Outbreaks would often occur after a ship arrived from a Caribbean port. It could be prevented by quarantining newly arrived ships in most cases. Attempts at its prevention by Benjamin Butler in New Orleans may have been the first example of a medical incentive plan. Butler, with urging from his superior officer Rear Admiral David Farragut, told Dr. Jonathan M. Foltz: “In this matter your orders shall be absolute. Order off all you may think proper [ships to quarantine], and so long as you keep yellow fever away from New Orleans your salary shall be one thousand dollars per month. When yellow fever appears in this city your pay shall cease.” Dr. Foltz quarantined all ships for 40 days 70 miles below the city, and this virtually eliminated yellow fever in New Orleans.

Yellow Fever is not transmissible from human to human except to the extent that mosquitos transmit it between them.  Mosquitos become infected by biting humans or monkeys which are infected and then pass it to other humans, and so the cycle goes.  That would be why this method of keeping people out of New Orleans was effective, even though mosquitos, and not humans, technically spread the disease.  New Orleans mosquitos didn’t have the chance to become infected as long as infected ships stayed quarantined.

A specific example of a quarantine was the USS Albatross (featured in the cover photo), which had a Yellow Fever outbreak while in service in the West Gulf Blockading Squadron.  It was ordered to Pensacola, Florida, where it went into quarantine until the crew was healthy again.  The same thing happened the next year, and it was back to Pensacola for another quarantine.

What did a quarantine look like onboard a ship?  Total shutdown, out at sea, trapped in a ship.  During the Black Death in the fourteenth century, Venice established formal quarantines that lasted for forty days.  Forty days seems to have been pretty standard until more modern times when we were able to tailor quarantines to incubation periods for specific illnesses.

So for the Mississippi River, which is where John Thomas was, the situation was a little different.  You had huge Naval vessels in a river, not on the open sea.  They were closer to land and closer to other people.  The information is scant on how quarantines were carried out on the river.  There was a pre-war quarantine station south of New Orleans where river ships and boats would be stopped and kept in quarantine if there were disease on board.  The station was recaptured by the Union. However, at the point Typhoid and Yellow Fever break out in Northern Fire, the Union Army and Navy are still driving south toward Vicksburg by way of the Mississippi River.  There would have been no way to get the ship south of New Orleans.

Therefore, I used a little imagination and a little history of Army quarantines and had John Thomas actually order his men to be removed from the ship and taken high up on a hill to quarantine tents.

PERSONAL SPOTLIGHT: Speaking of Army quarantines, there was a botched attempt at smallpox inoculation which led to an outbreak among the 20th Maine, of the Army of the Potomac.  A surgeon named Nahum P. Monroe grew really concerned at the possibility of an outbreak among the whole army, especially since they were on the eve of the Chancellorsville Campaign in the spring of 1863.  He said there was no telling where it would end if it ever got started.  He had to use persuasion to get anyone to listen. He pointed out that all a smallpox outbreak would accomplish would be to give aid and comfort to the Confederate Army.  He was effective: the regiment, sick and healthy, were quarantined away from the rest of the army on a hill.  Signs were posted around camp warning of danger if you got too close.  The 20th Maine, therefore, did not fight in the Chancellorsville campaign.

FOOD FOR THOUGHT: If you do a search for “Civil War quarantines,” you can find all sorts of primary source references to many different types of quarantines (just not Naval!).  Some involve armies, while others involve civilian refugees.  There were outbreaks in certain cities.  Sometimes people would flee for that cause, while sometimes they would be displaced by the war.  In any event, there are reports of hotels quarantining against people coming from infected cities.  Quarantine seems to have been a common word, a common experience and way of life, then.  Do you find that thought comforting regarding our current pandemic?  Does it make you grateful most infectious diseases in America have become more manageable?

ANALYSIS OF PHOTOGRAPH: This is a portrait (not a photograph, sorry!) of Quarantine Station near Port St. Phillip below New Orleans.  Any Louisianans out there?  Tell us what you know!  This is a very interesting piece of American history that seems to have been lost.  It was built some time before the war, presumably to prevent the spread of disease as vessels entered from the Gulf and could potentially spread diseases all the way up the Mississippi River into Canada.  There were several buildings on site, including a hospital, a storehouse, and a house where the Union high command once had headquarters.  Some sources report that vessels were pulled into quarantine here during the war.